Music for a cause – telling a little story

After pictures of the devastation caused by the huge 7.8MM earthquake that struck near Kaikoura were on every news channel, a folkie from Levin decided that one good community could help another. And you can still help (see below).

Folk music seems really appropriate; it is a great little community itself, folk music is made by and for people, not radio stations or record companies. And it so often sings of real people’s lives, of history and places, tragedy and heroism.

Hats off to Jo Sheffield, who started the ball rolling, put in plenty of hard work organising, and inspired so many musicians from around the country to give their time, talents, and for loads of people who paid to come to the concerts, or just gave a little of their spare cash.

The main fundraisers happened 8-11 December, and I was privileged to play in two of the concerts (Levin and Hastings). There was some really good music to be enjoyed at both too. $000’s were raised for people in need.

If you missed the fundraisers (or even if you were there), you can still contribute. And here’s how;

I was so inspired by Jo’s efforts that I created a new song. Earthquake themed, the power of folk music can often be to tell a really big story by telling a little one. And I recorded the song while making a video (a pop video? Err, well maybe a folk video anyway). 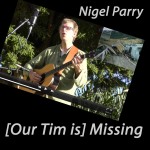 You can donate by buying the track (I put the price at $1 but you can pay whatever you like upwards from that – the more the merrier, it’s in a good cause). Proceeds will go to the NZRC earthquake appeal via an official fundraising link. Please head on over there now.

As a wee taster, here’s the video of the song, but please remember to donate by doing the Bandcamp thing;

The quake caused much damage, with services disrupted, communities cut off and livelihoods ruined. You can help!

Described by a radio presenter as; 'one of the finest traditional folk artists in NZ', Nigel Parry's unique mix of singer / songwriter, traditional and early folk music relies heavily on his vocal arrangements. Hailing from the UK, he was originally a rock singer and turned to folk music through friends, historical events and real ale. Nigel now lives near Wellington and in the last 4 years has performed at folk events and music venues around New Zealand, festivals and live on radio and in the UK, France and Canada.
View all posts by Nigel Parry Music →
This entry was posted in Festivals / events, Live performance, Ramdon music thoughts, Studio / recording and tagged earthquake, fundraiser, Kaikoura, music, New Zealand. Bookmark the permalink.

I would love to hear your comments Cancel reply